Welcome to the IoT Technosphere.

Welcome to the IoT Technosphere.

And it's an apt analogy. Although it was in use as a phrase before his blog post, Bruce Sinclair (the same Bruce Sinclair that presented recently on digital twins, actually) provides some meat to the metaphoric bones of why IoT is an ecosystem in an essay that's a nice entree to and overview of IoT at the big-picture level: Like the ecosystems that we're familiar with, IoT has a variety of interrelated entities that form a system -- some entities produce data, some entities consume that data, and so on.

But more and more, the concept of IoT as an ecosystem just isn't enough: It's too large and it's too diverse. We might, for example, reasonably talk about the IoT wearable device ecosystem, or the Industrial IoT ecosystem -- but how do we accurately capture the scope and the scale that is IoT in its entirety?

The IoT Biome -- The IoT Technome?

Should we perhaps be talking about IoT as a biome, rather than an ecosystem? In nature, one simplistic way of thinking of a biome may be as a collection of ecosystems with life that shares common properties across those ecosystems. Thus, although there's a Death Valley ecosystem, and a Gobi ecosystem, and a Saharan ecosystem, etc., we can talk about the desert biome as a whole because life in each of those ecosystems tends to hold many features in common. Does the same hold true for IoT? Should we be referring to the IoT Biome, or perhaps even better, the IoT Technome?

Maybe.  It's certainly fair to say that IoT devices have evolved / are evolving to share certain features in common across their deployments. Connectivity is the obvious, on-the-nose, example, but many devices are also evolving to have edge computing capabilities and many other features in common.

Thus, while we might justifiably think about connected devices as comprising the IoT technome, as a concept it doesn't achieve our goal of finding a phrase that aptly encapsulates IoT as a whole.

Instead, I agree with the IEEE that we need a concept that more appropriately reflects IoT as being an ecosystem of ecosystems, or a global ecosystem.

From there, it's a short and obvious leap to arrive at the phrase "IoT technosphere" to signify everything for which we have been using the term "ecosystem."

I'm nowhere near being the first person to coin "technosphere" -- it's been used elsewhere to signify all man-made things on Earth, for example. Nor do I foresee "IoT technosphere" necessarily supplanting "IoT ecosystem" in the popular consciousness when it's such a buzzword -- and in "The Three Phrases of Pitch Indifference" I've even argued that using IoT buzzwords can sometimes be the right thing to do.

That said, my mission here isn't to change the world -- it's to change the way that people think about IoT as a whole. The IoT technosphere (see what I did there?) is too big, and there are too many disparate yet interrelated parts, for any one player to go it alone. Instead, think of IoT as an ecosystem of ecosystems.

Welcome to the IoT technosphere. 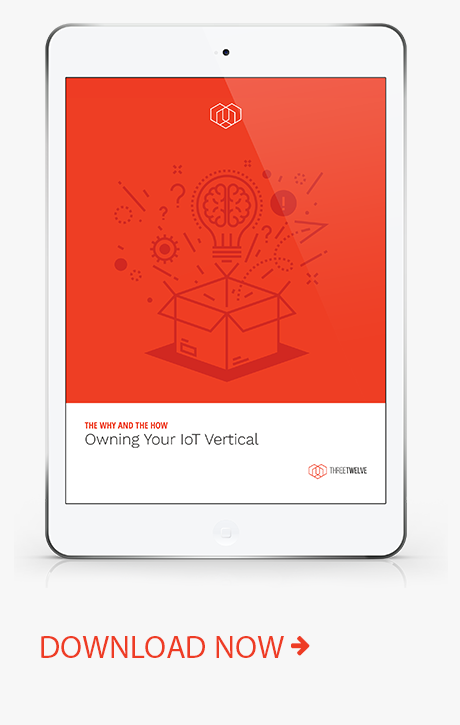 IoT can be hard. Disrupting a vertical can be even harder -- especially if you're spending time trying to tell people what you're good at instead of asking yourself what you're FIRST at.

Fortunately, there's a free eBook available from ThreeTwelve, the IoT Marketing Agency, which will fill you in on the why and how of dominating your IoT vertical. Grab it before it's too late:

About the Author: David Dewhirst is a Founding Partner of ThreeTwelve and a leading thinker in SaaS and IoT marketing.
Share This Story | |
NEXT POST